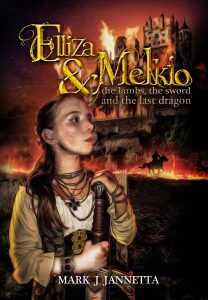 Title: ELLIZA & MELKIO: THE LAMBS, THE SWORD AND THE LAST DRAGON.

This is a feature length children’s novel I first wrote on deployment, revised and expanded several times since and went on to get professionally edited in 2017.

Princess Elliza and Prince Melkio grow up in rival kingdoms, where they are haunted by insecurity and struggle to repair crippled family relationships. Through an interplay of trials and adventures their paths cross and their futures become entwined. Both are destined to be great leaders, but each of them has choices to make. Can Elliza overcome her physical and emotional scars that bind her to a broken past? Will Melkio follow in the footsteps of his fatheror will he allow resentment to steer him down the wrong road? When all hope appears to have faded, how will they continue to press forward?

This is a story of adventure and discovery, a fantasy tale depicting the classic conflict all young people must face as they engage in forging the person they will one day be. At its core is revealed the war that rages in all our hearts—that between good and evil.Will fear prevail or love conquer all?

Book Two: ELLIZA & MELKIO. THE LIONS, THE SWORD AND THE DRAGON STONE.

Now the fantasy world and character’s have been opened up in book 1, this follow on picks up pace and keeps running full speed ahead. Work in progress.

There is a physical world and a spiritual world. Both are governed by laws, but most have forgotten the old ways. What is remembered has become myth and legend. However, there was a time of dragons and giants, as Cordiva and its inhabitants will quickly discover, as darkness begins to advance. Will Elliza, Melkio and friends be able to stop these powerful forces beyond their comprehension?